Often when we think of tomatoes we think of their fruits (yes - they are fruits, not vegetables). Common or domesticated tomatoes most often have large fleshy red fruits with few seeds. These are features that plant breeders have selected for. Unlike domesticated tomatoes, however, the wild tomatoes have a different range of fruit shapes and colors. This is true of many of their other characters or traits, including their flowers, leaves, and natural defenses.

Different strains of domesticated tomatoes are known for their enormous range in fruit shape, color, and size. Unlike these, fruits of their wild relatives are relatively small and uniformly round, although they also vary in color (from green, yellow, orange, and red), and other features such as the presence or absence of protective hairs. Here are some examples of fruit variation among wild tomato species. 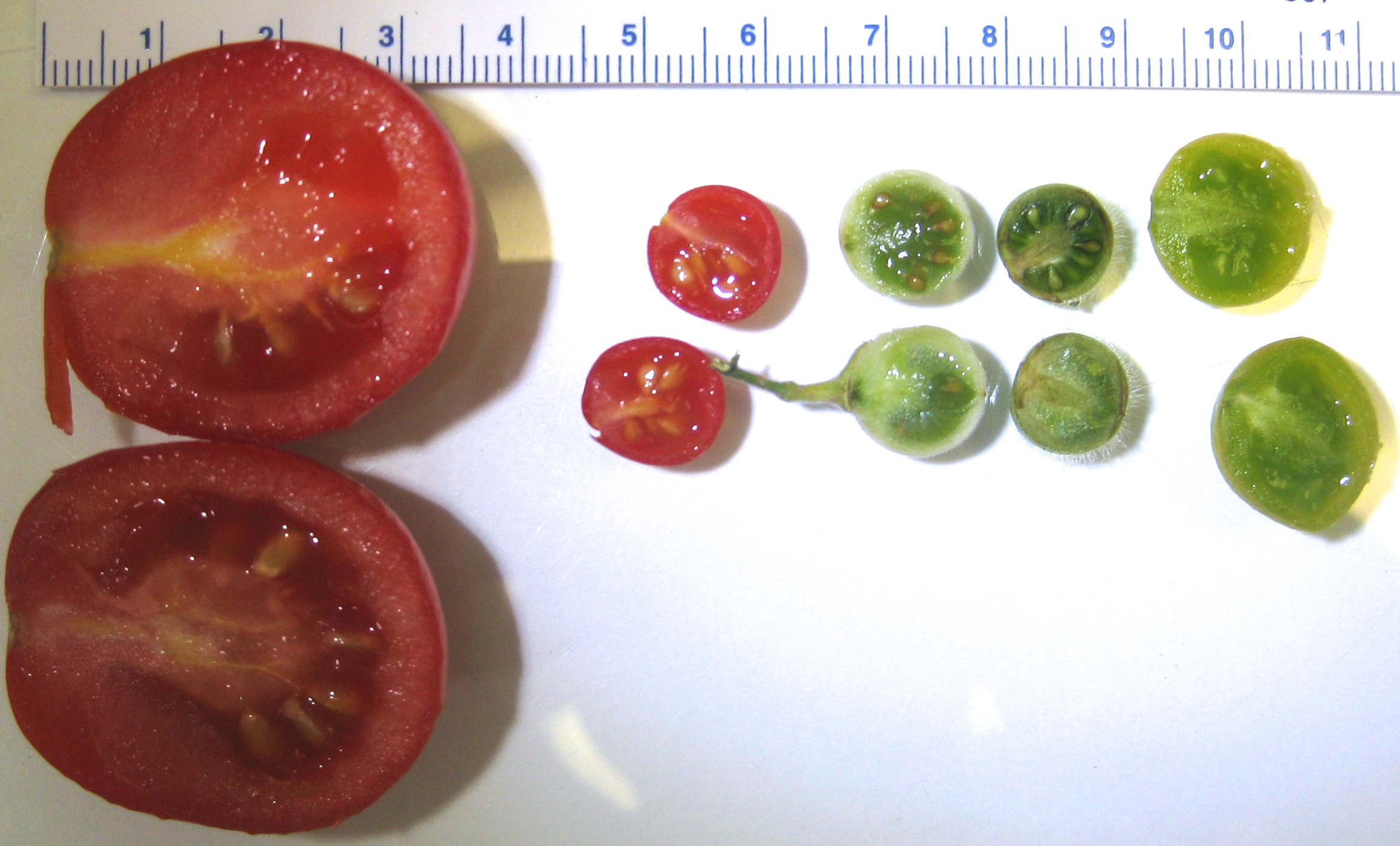 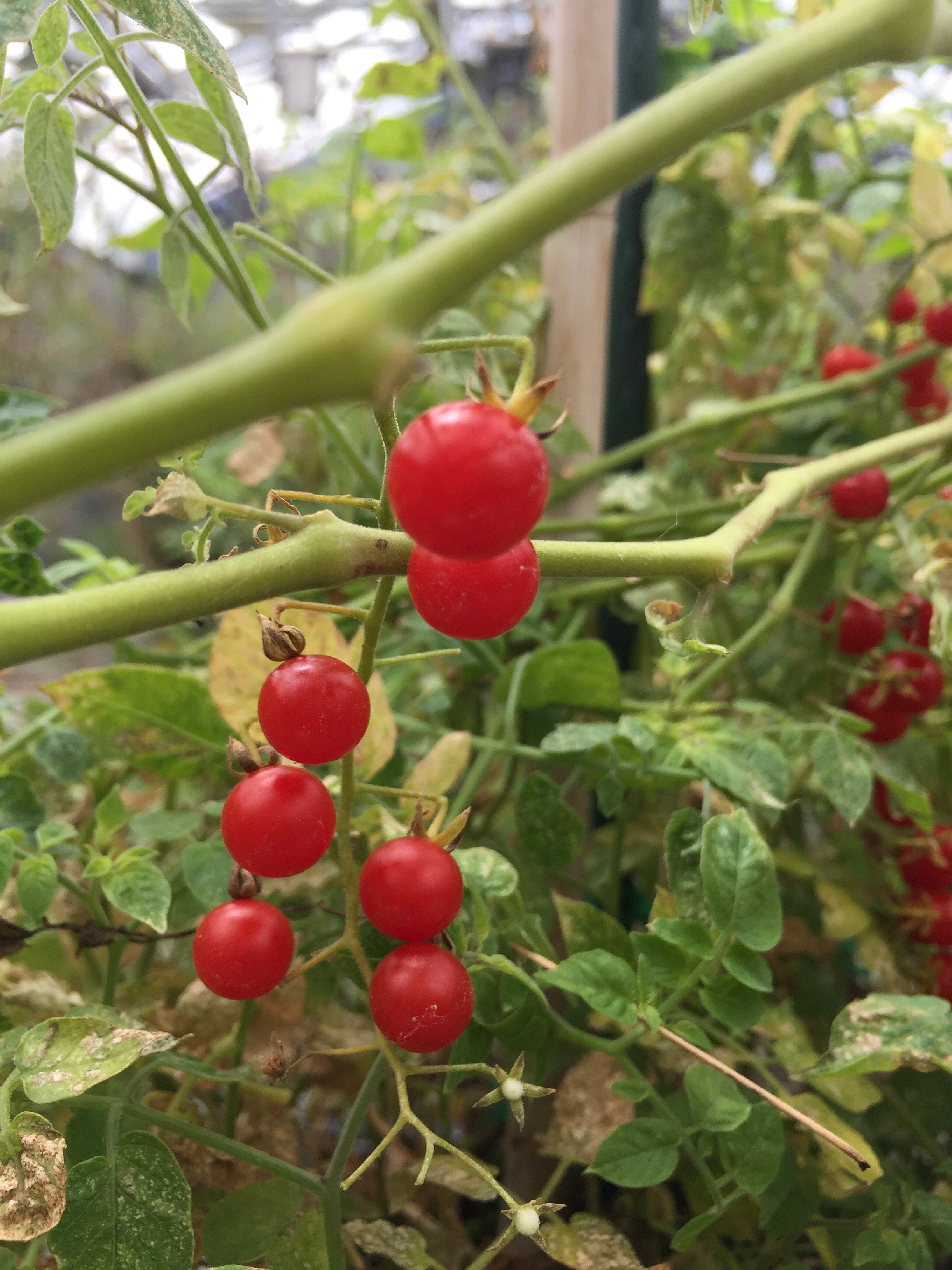 One of the closest relatives of domesticated tomato, Solanum pimpinellifolium has round fruits that are red and sweet and from the size of a pea to a cherry when ripe. This indicates that red fruit color, and relatively, sweet fruits, originated before the domestication of tomatoes. 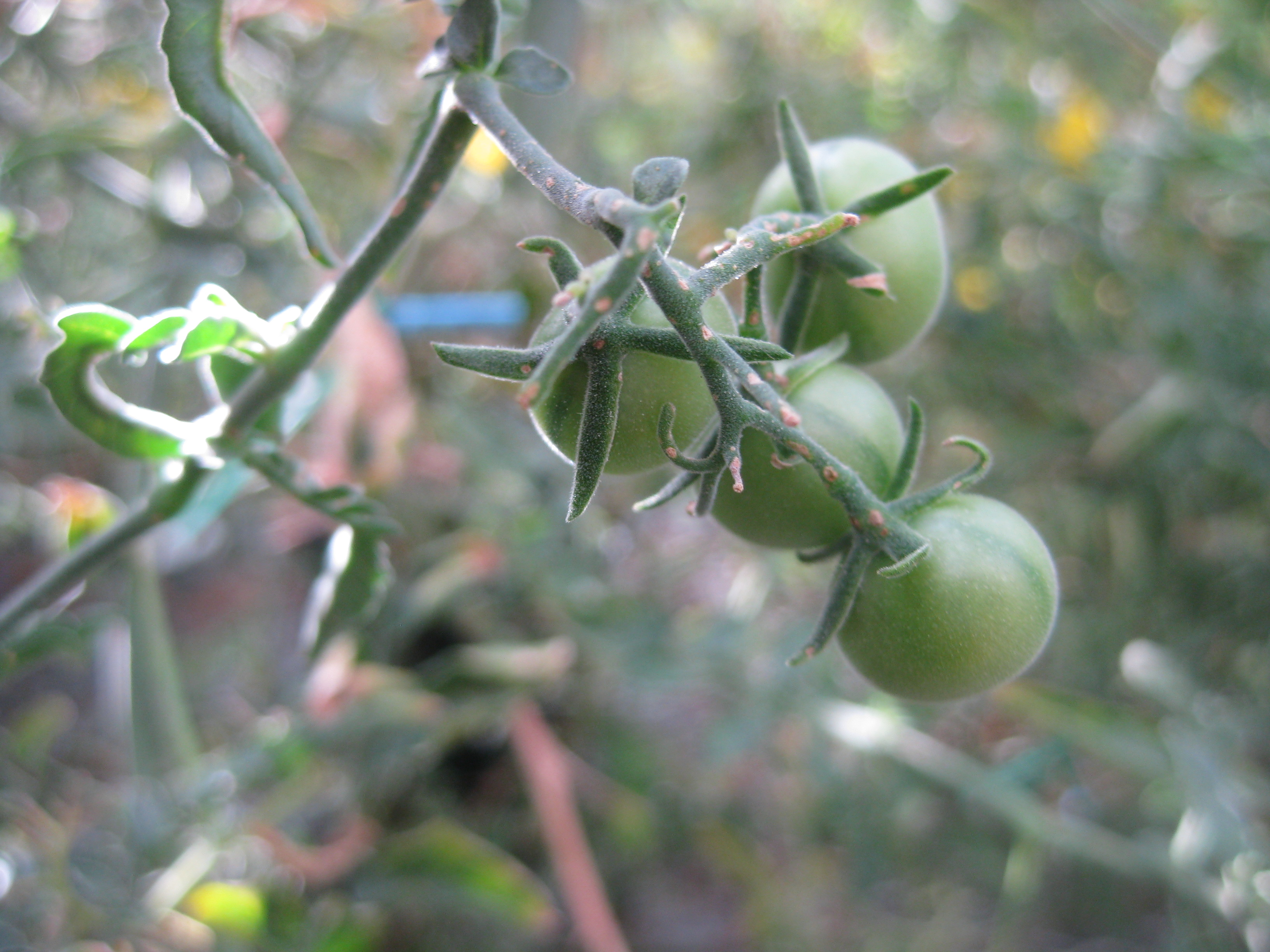 Wild tomatoes that are more distantly related to domesticated tomato have green fruits when ripe. Their fruits also tend to be firmer, but are still somewhat sweet. The fruit of S. chilense, for example, are lightly hairy and green striped when ripe. (Picture: D. Haak)

The typical tomato flower is yellow and star-shaped ('stellate') with 5 petals arranged around a fused column of tissue that contains pollen (the 'anther cone') and protects the seed bearing parts of the plant (the 'carpel'). Still, wild species flowers differ in many other aspects, including their size, their orientation (the direction in which a flower points), and the number of flowers in a single display (their 'inflorescence'). Here are some typical features of wild species flowers. 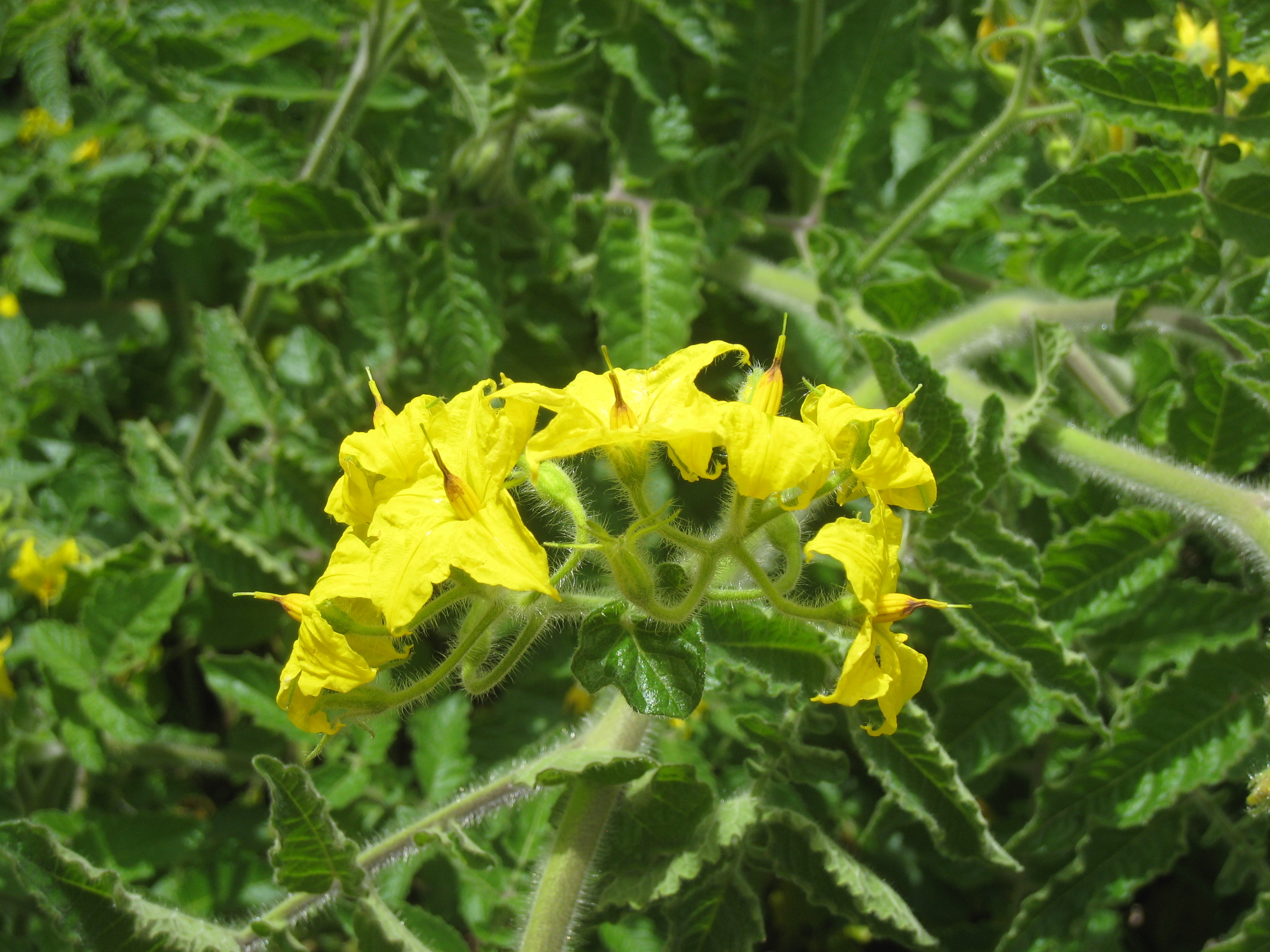 Tomatoes, both wild and domesticated, are 'buzz-pollinated'. When bees visit these flowers, they grasp onto the anther cone and vibrate their bodies to release the pollen. This bruises the anther cone, as you can see on these S. habrochaites flowers in southern Ecuador, but allows pollen to be transferred to fertilize other flowers that these bees visit. 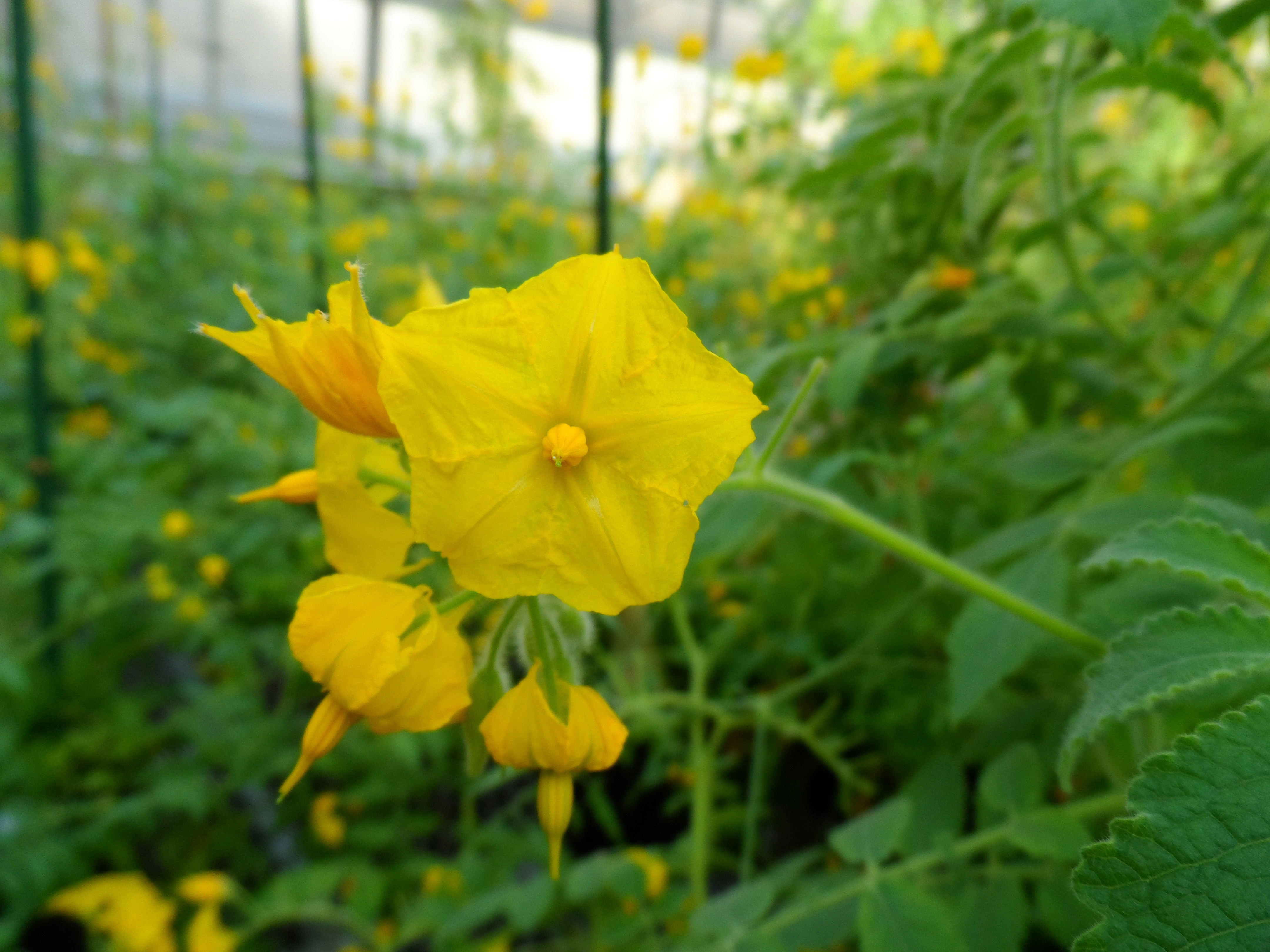 Species with larger flowers, like these on S. habrochaites, are often more 'outcrossing'. They produce large amounts of pollen that is transported by pollinators to other flowers for fertilization. (Picture: J. Kostyun)

Species with smaller flowers are often self-fertile, which means that pollen is able to fertilize the ovules (eggs) of the same individual. Smaller-flowered species tend to be less attractive to bees, and to make less pollen. (Picture: D. Haak) 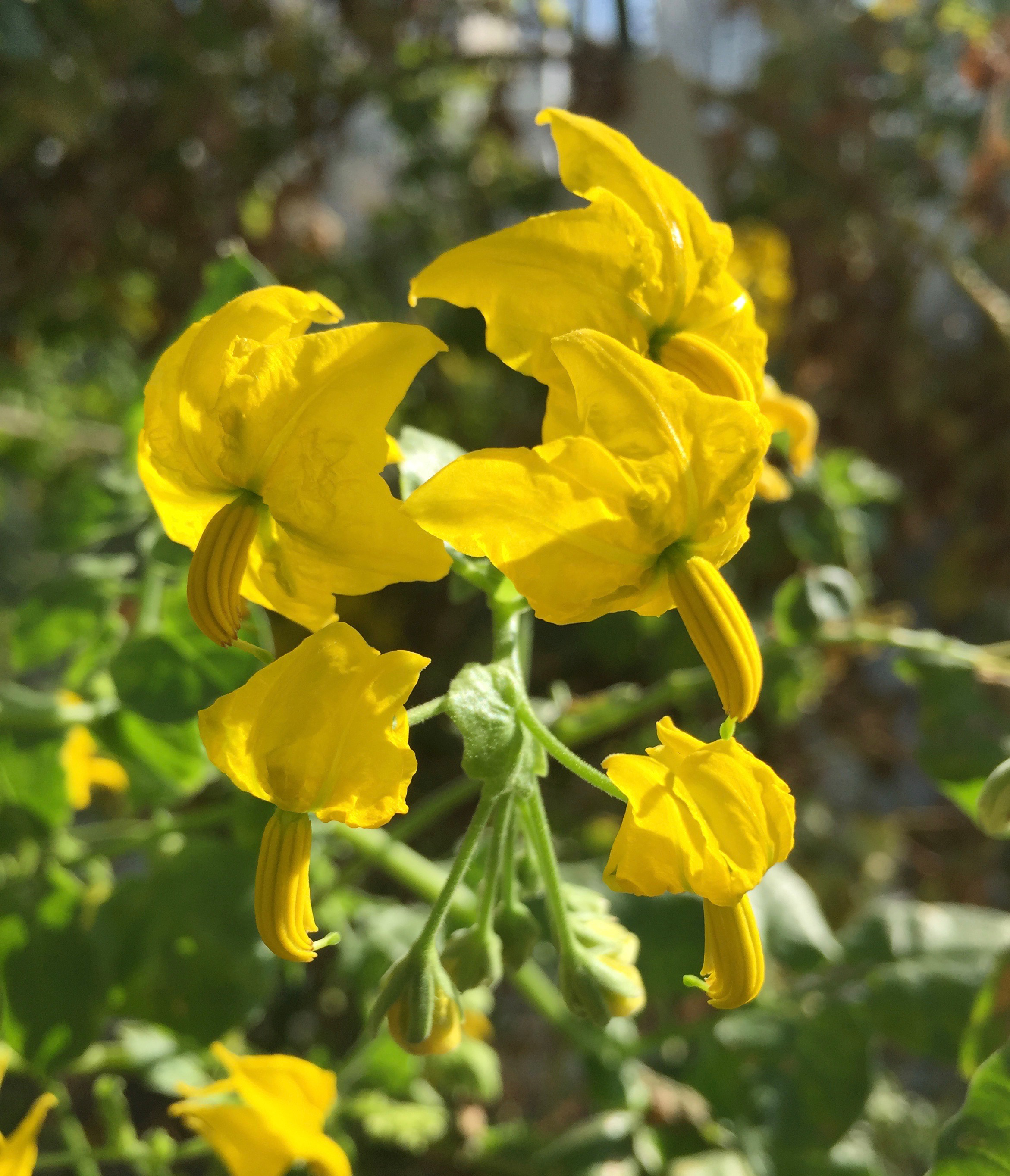 This is a single floral display (or 'inflorescence') on Solanum pennellii. Larger displays of flowers are likely more conspicuous to pollinators (bees) and provide more rewards to these visitors. (Picture: L. Moyle)

Leaves are the organs within which most plants convert sunlight and water into food (sugars). As such, they’re critical for survival and growth. Leaves of different wild tomato species vary from each other in size, shape, thickness, toughness, and the density and types of hairs. Many of these differences are related to the natural environments in which these different populations and species live (ecology). For example, species living in drier climates often have thick succulent leaves that grow more slowly but last longer. Some examples of wild tomato leaf variation include: 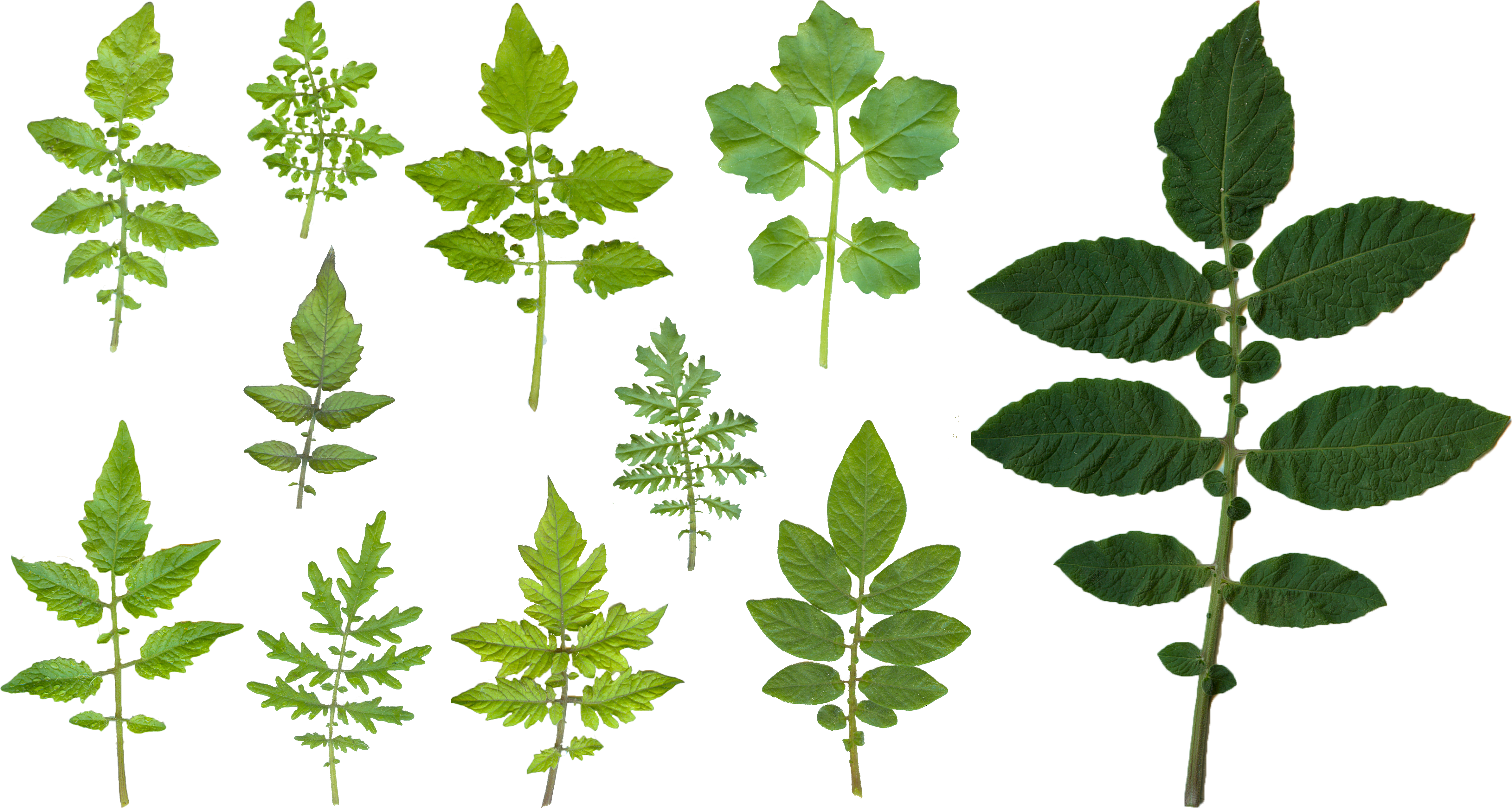 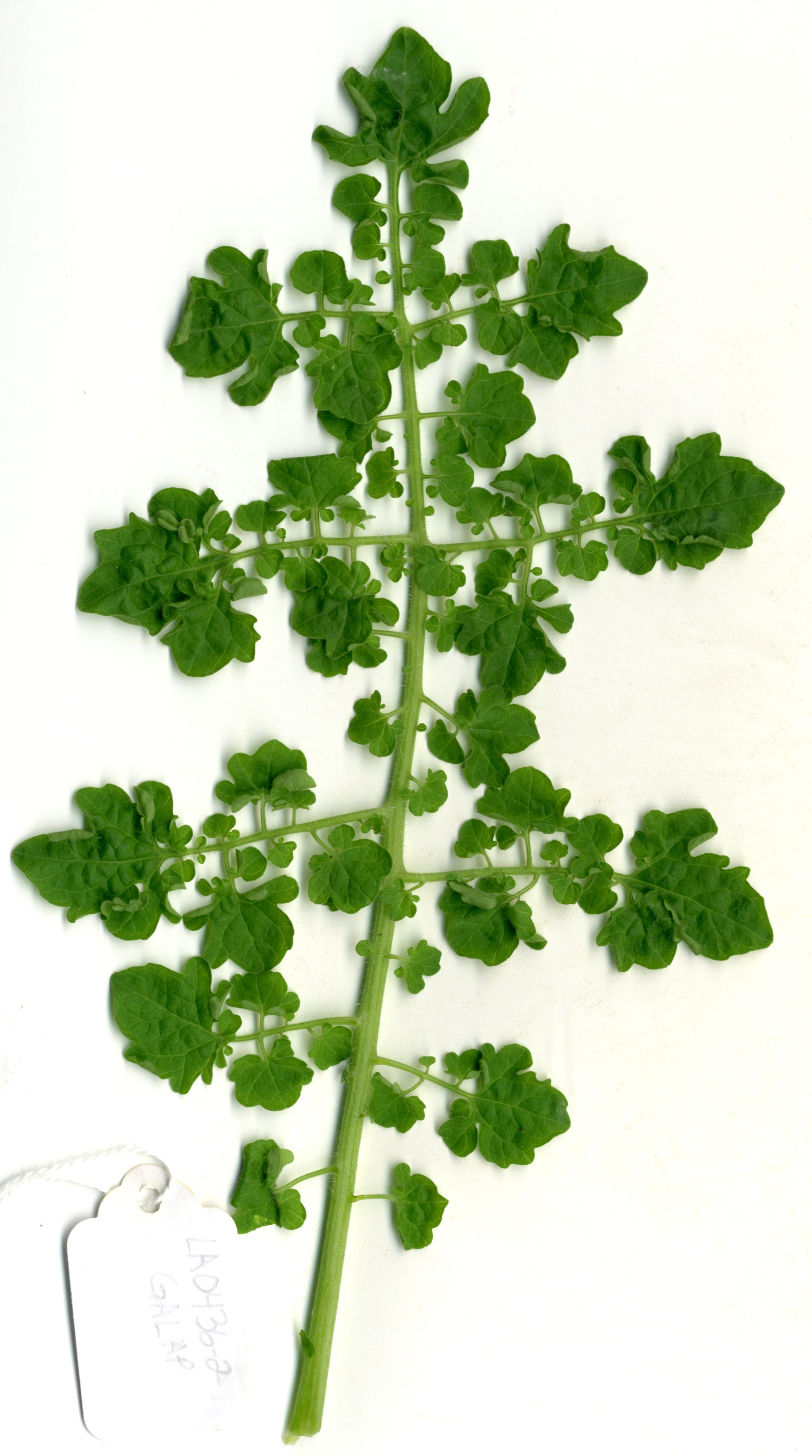 Solanum galapagense leaf: This species is one of two that is native to the Galapagos Islands in Ecuador. It has the most highly 'dissected' leaves of all wild species, meaning that there are many lobes around the edge ('margin') of each leaf. (Picture: N. Sherman)

Wild tomatoes bristle with an array of natural defenses against their enemies, from dense coverings of plant hairs to toxins that are deadly for insect attackers. The hairs, or 'trichomes', of wild tomatoes are particularly diverse, ranging from long thin mostly hollow hairs, through to short squat 'glandular' trichomes that look like clenched fists on short stalks. These hairs can act to protect the leaves from herbivores (leaf-eating animals) either by creating a physical barrier or by containing plant chemicals that deter or harm these herbivores when eaten. 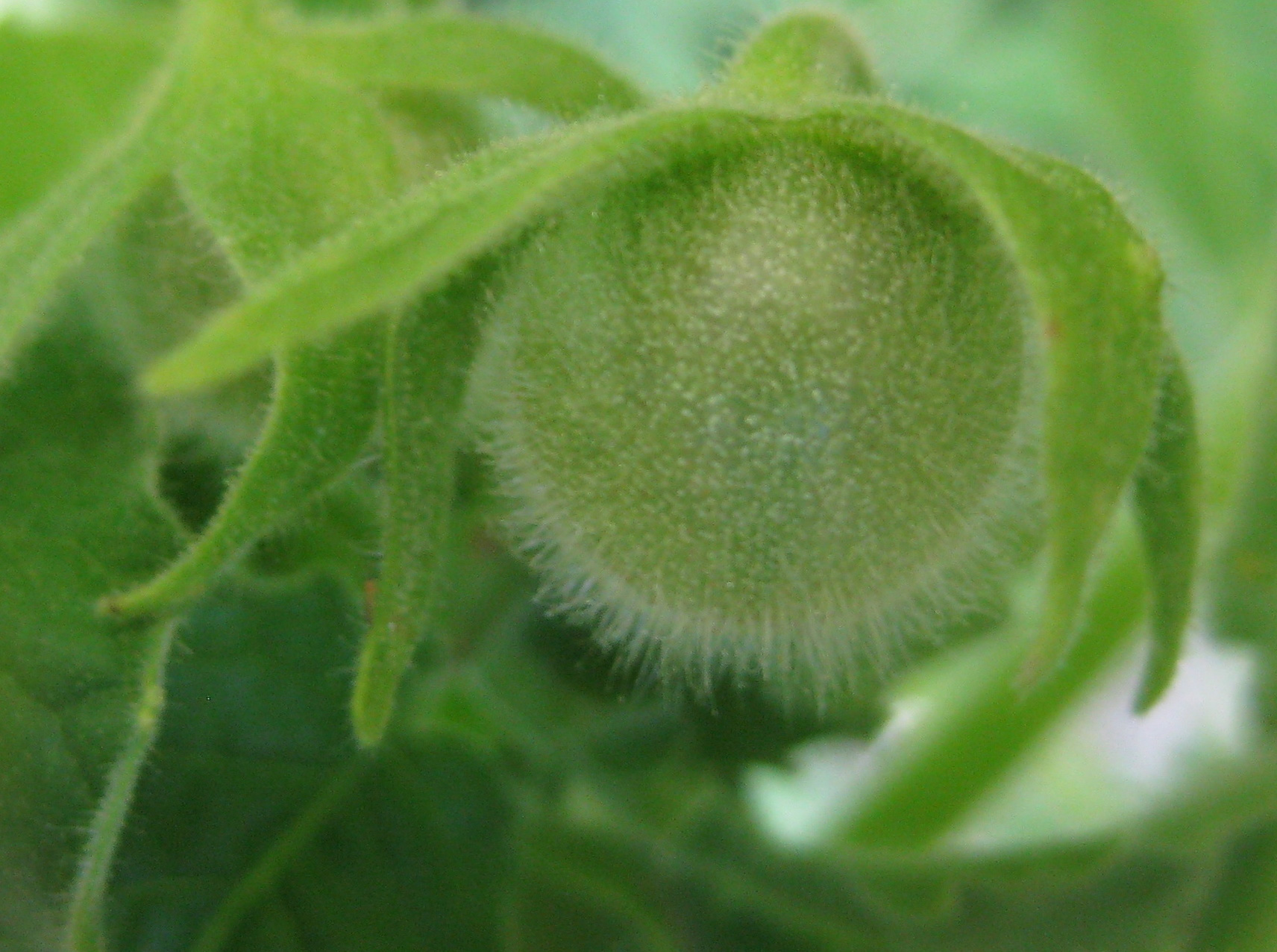 Trichome defenses don't only appear on leaves and stems of plants. They also appear on the surface of fruits, like this one from S. pennellii. (Picture: D. Haak). 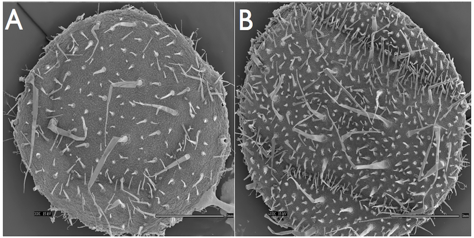 The number and density of trichomes can change in response to herbivore attack. Here are two leaf sections from Solanum habrochaites; the left one is before the plant responds to attack, the right is after. The images are taken with a Scanning Electron Microscope (SEM). (Pictures: D. Haak) 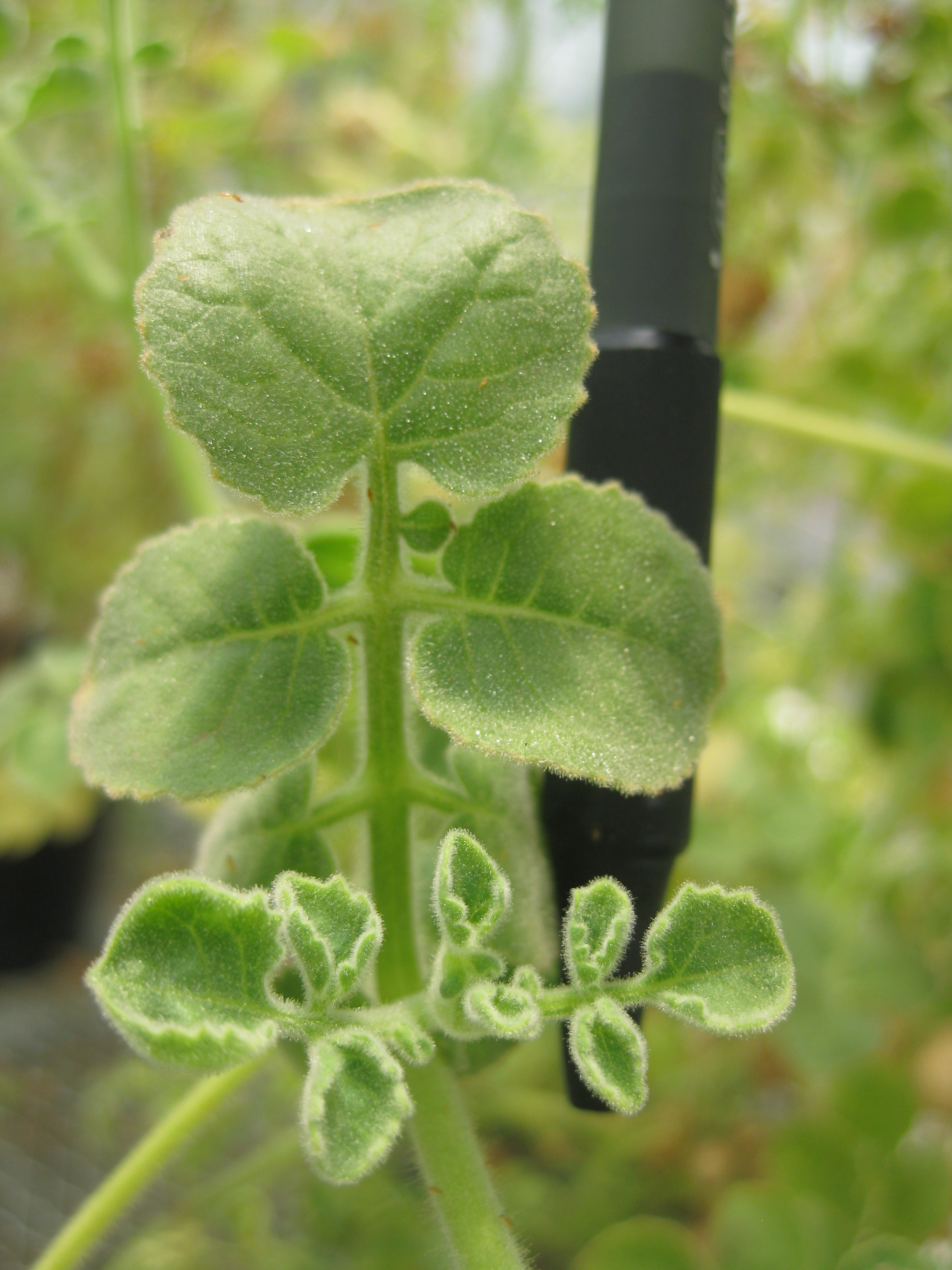 Trichomes on S. pennellii leaves: In addition to defense, trichomes can also protect the surface of the plant leaf from losing water via evapotranspiration, an important function in dry environments. (Picture: D. Haak) 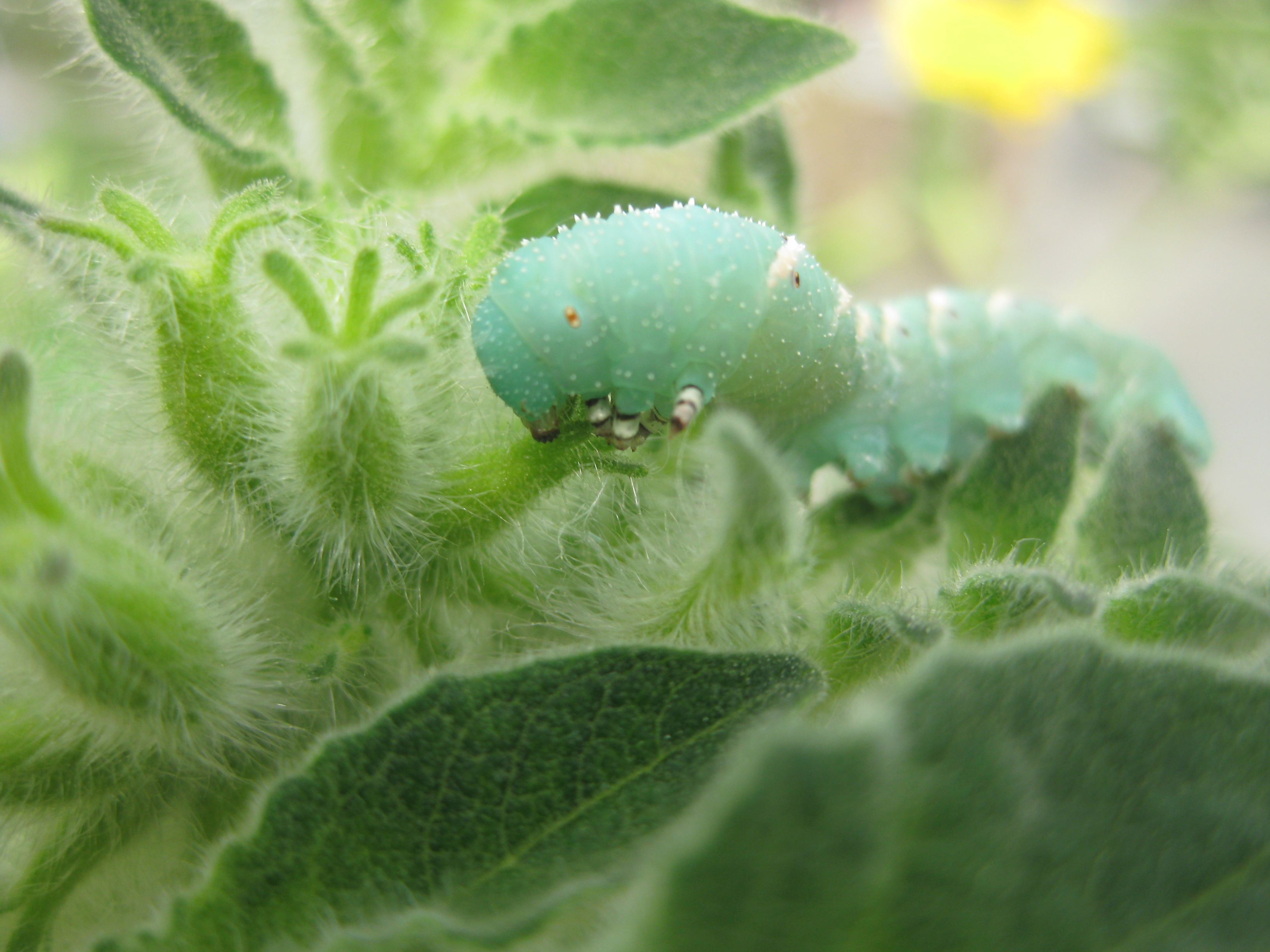 The leaves, stems, and flowers of Solanum habrochaites are covered with a dense layer of sticky trichomes that can trap small insects, just like flypaper. But trichomes don't defend against all enemies. This Manduca larva is a specialist herbivore of Solanum species. It frequently eats trichomes along with leaves, although it can be deterred with natural chemical compounds. (Picture: D. Haak)